Environmental Inspiration in Your Own Backyard

Brick lined streets, open store fronts, new built on old, planes, trains, and undergrounds! My husband and I recently returned from a brief whirlwind tour of London, during which we walked (and walked and walked) through the streets, ate delicious food, and saw what we could see. I also want to say a quick thanks to all of the great people we saw there, some of whom have made the jump from my husband’s cricket blog over to my nature one–it was wonderful to meet you!

It is always fun to go explore a new place, and I saw a lot of great city nature like pigeons, magpies (extremely smart birds that can recognize themselves in mirrors), and little parks blooming green through the gray limestone buildings.  In addition to the nature itself, though, there were many other signs of the great influence it has on us as humans. One of these is all of the plants and animals that make an appearance in the art and architecture all over the city. I have never thought to look at these specifically before, but I am sure that in the future I will see it in every city and town, not just London.

Once I noticed this I spent the rest of the trip on the lookout for creatures carved out of stone and metal in addition to the living ones. As with so many things, once I noticed I realized they were everywhere! I continued the search into the British Museum, where I found a bounty of nature represented in historical artifacts.

Below are just a few of what I found during our trip:

A cricket (I believe?) as a hieroglyphic symbol in Egyptian writings from the British Museum 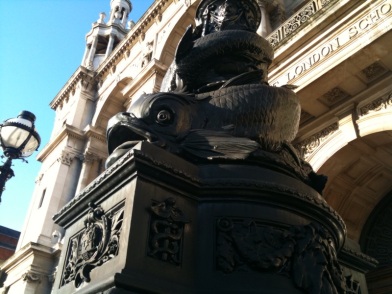 A large fish (catfish? koi?) adorns a lamp-post on the street in London 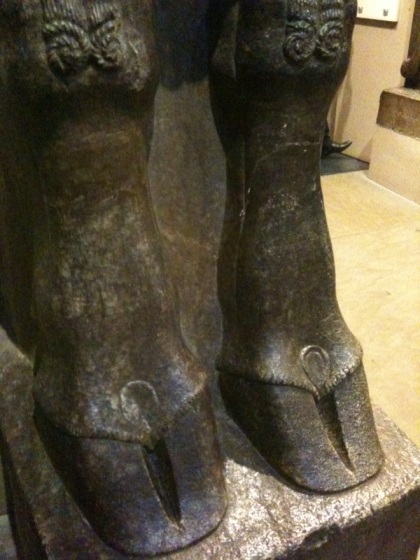 A close up of a sunflower held in the hand of a Hindu god in a statue in the British Museum.

A lion stands guard over Trafalgar Square in London.

A close up of one of the many animals adorning the gate leading into Shakespeare’s Globe Theater near London Bridge. 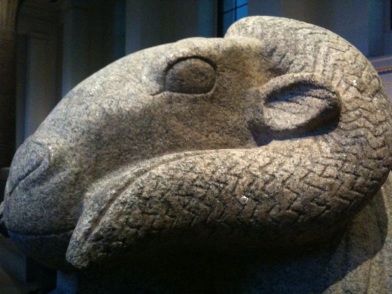 A close up of hieroglyphics, which contain many animal symbols to represent letters and sounds, like a goose, a cricket (or is it a wasp?), and a falcon.

As I mentioned, once I started looking I found nature represented in art, architecture, and artifacts all over the city. It was especially interesting in the British Museum–I had planned on going to the Natural History Museum, but when I realized we only had time for one decided on the British Museum instead, and it was exciting to see how much nature was still there after all! I am excited to keep looking for this kind of representation in the future, especially at other art and history museums. Who knows how many examples of this are hiding all around us that I’ve just never noticed before!

What kind of examples of this are there where you live? Is there something you walk by every day and just haven’t noticed before? Have you ever incorporated natural themes into decorating your own room or home? We are all more strongly influenced by nature than we realize, and as always, you can find nature anywhere if you look hard enough!

Activity for parents/teachers: Take kids on a scavenger hunt through a city, town, museum, or even your own house to see how many representations of nature they can find! How many different types or species can the recognize? Are there more animals or plants? Were they made recently or a long time ago? If cameras are available take pictures of each example and make a collage to hang up at home or in the classroom. Optional: Make a bingo board of different plants/animals for kids to take a long–see if anyone can find enough examples to win!

2 Responses to “Nature Set in Stone”